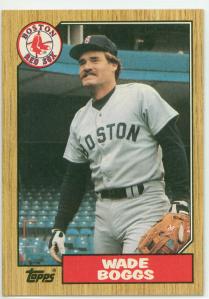 Only Ted Williams has a higher Red Sox lifetime batting average than the .338 figure Boggs hit during his 11-seasons playing in Beantown. Wade won five batting titles as a Red Sox and had seven straight 100-run, 200-hit seasons. Although he had some notorious extra marital exploits off the field, nobody was more focused or more driven on a baseball field than Boggs. The thought of him in a Yankee uniform was literally beyond the realm of anyone’s imagination, but in 1992, Boggs hit just .259 in the final year of his Red Sox contract. That was the first time in the eleven seasons he’d been in the big leagues that he failed to hit .300. The fall-off was just enough to dissuade the Red Sox front office from going all-out to re-sign their All Star third baseman. The angry Boggs signed with the Yankees instead. He proceeded to win his first two Gold Gloves plus his one and only World Series ring, while averaging .313 during his four seasons in pinstripes. After finishing his career and getting his 3,000th hit as a Devil Ray, Boggs was elected to the Hall of Fame in 2005.