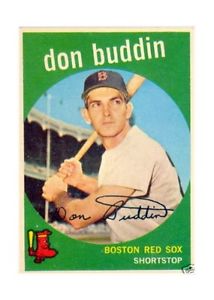 Though the quality of baseball played at Fenway Park got gradually worse throughout the 1950’s, you couldn’t blame it on Tom Yawkey, the team’s owner back then, being cheap. He spent hundreds of thousands of dollars during that decade signing high school baseball stars who were anointed with “can’t miss” labels by Red Sox scouts. Those scouts, however, must have been reading newspapers or bird-watching in the stands during high school games instead of watching some of these bonus babies hit, run and field, because too many of their glowing reports on these sure-thing prospects turned out to be more fiction than fact.

In the case of South Carolina native, Don Buddin, the culprit was Boston scout Mace Brown. Buddin was a high school football star who could have gone to just about any major college in the south on a football scholarship. But he was also a very heavily scouted high school baseball player so when Brown got him to sign with the Red Sox for $50,000 in 1952, it was considered a real coup for the Boston franchise.

Three seasons later, he had progressed to Boston’s top farm club in Louisville, which was being managed at the time by Pinky Higgins, who fell in love with his new shortstop and became one of his biggest career advocates. What everyone was ignoring about this kid was the fact that he was making an alarmingly high number of errors at short (164 during his first three seasons in the minors.) Buddin did have a good bat, decent power, especially for a shortstop and a great eye for the strike zone. It was his offensive ability that got Buddin to the big leagues by the 1956 season, when he was 22-years-old. Of course. it didn’t hurt that Higgins had been promoted to the Red Sox’ skipper position by then, which may also help explain how Buddin won the parent club’s starting shortstop’s job as a rookie that year.

That first year Buddin had a tough time tackling big league pitching, averaging just .239. Of course back in the fifties, big league shortstops were not paid to hit and when you added in Buddin’s 65 rookie season walks, his on base percentage was actually considered to be very good for someone who played his position. The problem again was Buddin’s defense. He made 29 errors in the 113 games he played as a rookie but Higgins insisted this young man would get better with more games under his belt. Unfortunately, Buddin didn’t get to play any games in 1957 because he was drafted and served a year in the military.

When he returned in 1958, his error prone glove came back with him. Buddin committed 31 more fielding miscues that season and the Fenway faithful began booing his defensive lapses. When he made 35 more the following year, the boos grew louder and the derisive nickname “Bootin Buddin” began to take a firm hold in and around Boston baseball circles.

Higgins stuck with Buddin because of his ability to get on base and his ability to pop a ball out of the park every now and then. He hit 12 home runs in 1958 and a 10 more the following season. But the errors continued unabated and when Buddin’s offensive numbers lagged in both 1960 and ’61, the Red Sox gave up on him, trading him to the just formed Houston club in the expanding National League in November of 1961 for shortstop Eddie Bressoud. After one terrible year with the Colt-45’s and another bad one for the Tigers, Buddin’s big league playing career was over by 1962.