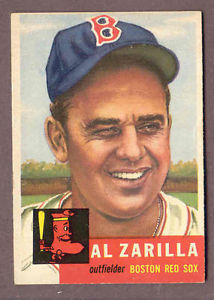 This L.A.-born outfielder was a key cog in two of the most productive lineups ever fielded by the Boston Red Sox. Al Zarilla got his start as a professional baseball player during the Great Depression, when he was signed at the age of nineteen, by the old St. Louis Browns in 1938. It took him five years and quite a few hitting adjustments to make the big leagues, but once he did, he helped the Browns reach the World Series in 1944 for just the second time in the franchise’s history.

His best season as a Brown took place in 1948, when he hit a career high .329 and made his only All Star team. After he got off to a slow start the following season and the struggling Brown organization needed cash, Zarilla was traded to the Red Sox for outfielder Stan Spence and over 100,000 of Tom Yawkey’s dollars. He then took over as Boston’s starting right-fielder and hit .281 for a Red Sox team that was edged out for the AL Pennant on the final day of the 1949 season by the Yankees. In fact, it was Zarilla diving catch attempt of  Jerry Coleman’s bloop fly ball to shallow right in the eighth inning of that season’s final game, that came up inches short permitting three decisive runs to score for New York.

As good as Boston’s offense was in 1949 it was even better the following year when they scored 1,027 runs, which was over 100 more than any other team in the league scored that season. Zarilla accounted for 92 of those runs himself plus averaged .325. The lowest batting average of any Boston starting position player that season was Bobby Doerr’s .294! And still the Red Sox finished second to a Yankee team that featured the best starting rotation in all of baseball.

After losing two straight pennants despite all that great hitting, it seemed clear to the team’s front office that they could part with some of their offense to acquire better starting pitching. Since the Red Sox had super-sub Billy Goodman available to play the outfield, Zarilla was the player traded to the White Sox in December of 1950 in a deal that brought two White Sox starters, Ray Scarborough and Bill Wight to Fenway.

“Zeke” Zarilla did get to return to Beantown in 1953 and ended his big league career as a Red Sox spare outfielder and pinch-hitter in 1954. He later became a scout for the A’s and the Reds before retiring to Hawaii, where he died of dancer in 1996, at the age of 77.