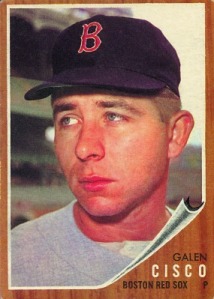 Galen Cisco grew up on his parents farm in Ohio and became a great high school football and baseball player. He fulfilled a boyhood dream by then attending Ohio State where he became an All American pitcher on the school’s baseball team and was a two way starter at running back and linebacker for Coach Woody Hayes’ Buckeyes. In his senior year, Ohio State beat Oregon in the 1958 Rose Bowl. Cisco was good enough on the gridiron to pursue a career in the NFL. Instead, he chose baseball and was signed by the Red Sox. It took the right-hander four years to work his way through Boston’s Minor League system. His teammates in the minors were fellow pitchers, Don Schwall and Dick Radatz. Boston’s front office was hoping these three prospects would rejuvenate what had become a very mediocre Red Sox pitching staff. Cisco got his first taste of the big leagues appearing in 17 games for the 1961 Red Sox. He did not pitch well that year, finishing with a 2-4 record and a sky-high 6.71 ERA. His sophomore season was not much better. He was 4-7 with a 6.07 ERA  when the Red Sox decided to throw in the towel on Cisco and put him on waivers in September of 1962. The newly formed New York Mets claimed him immediately and Galen spent the next four years pitching pretty decently for the very worst team in all of baseball. He actually returned to pitch for Boston during the 1967 Impossible Dream season but he was released at the All Star break that year. In 1969, he reappeared on the staff of the newly formed Kansas City Royals. He retired after that season with a 25-56 record, which was much more a reflection of the caliber of teams Cisco played on than it was his pitching ability. After hanging up his glove, Cisco became a highly respected Major League pitching coach for the next three decades.