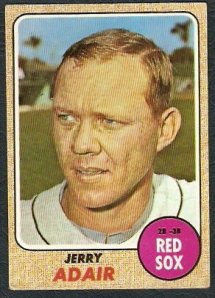 On June 2, 1967 the Red Sox made a deal with the White Sox to shore up their infield. At the time, the Impossible Dream of making it to that year’s World Series was hardly even a figment of Red Sox Nation’s imagination. Boston’s record at the time was 22-21 and nobody thought the player they picked up from Chicago in exchange for the veteran reliever, Don McMahon was going to make that big of a difference as far as Boston’s pennant hopes were concerned. That’s because the player’s name was Jerry Adair. He had spent most of his previous ten years in the big leagues starting at second base for the Orioles and subbing at shortstop. He had a good glove and got his share of hits but he was too aggressive at the plate and as a result, he hardly ever walked and his low on base percentage hurt his scoring potential. He was hitting just .204 when he walked in the home team clubhouse at Fenway Park and hardly any body noticed he had arrived.

A couple weeks later, the Red Sox starting shortstop, Rico Petrocelli went down with an injury and Boston Manager Dick Williams put Adair in his place. Fortunately for the Sand Springs, OK native and the Red Sox, he started hitting. By the end of July he had raised his average by close to sixty points and gotten so many big hits for the Red Sox that Beantown sportswriters began referring to Adair as “Mr. Clutch.” He was so hot that when Petrocelli returned to the lineup, Williams would play Adair at third or second to get his bat into the game. Boston’s record with Adair on the team was 71-48. He ended up hitting .291 during his 89 games as a Red Sox that season. and there was no doubt that his acquisition and his strong finish played a huge role in making that Impossible Dream Pennant in ’67 come true.

Adair’s offense then fizzled in the World Series and after he hit just .218 in ’68, Boston left him unprotected in the 1968 AL Expansion Draft and he was selected by the Royals. He became Kansas City’s first-ever regular second baseman in 1969 and had a decent season, hitting .250 and driving in 48 runs. But he lost his position to Cookie Rojas the following year and was released in 1969, his final big league season. He then went to Japan to play ball for a while and later returned to the big leagues as a coach. Tragically, Adair was diagnosed with cancer and died from the disease at the young age of 50, in 1987.